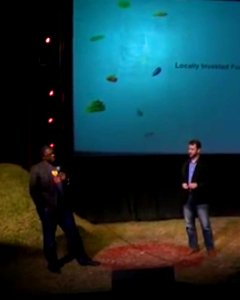 Born and raised in Edwards, Mississippi, Nick Wallace blends his family-farm origins with sophisticated techniques to create exceptional dining experiences. His culinary philosophy and passion reflects the growing trend towards a healthier lifestyle and an emphasis on home-grown and farm-raised products. Wallace participated in the James Beard Foundation’s third Chefs Boot Camp for Policy & Change in 2013 and has served as chef at The Beard House in New York City on two occasions. He was named to the 2013 “Best Chefs America” list and has appeared on the Food Network’s “Cutthroat Kitchen.”

David Watkins, Jr. worked as a video producer, theater director, project manager and teacher in New York and Los Angeles before returning to Jackson, Mississippi, to become a food entrepreneur. David joined forces with local restaurant professionals to form Soul City Hospitality, a group that is working to satisfy growing demand for fresher, locally sourced food. David is managing the implementation of a $100,000 grant from the USDA to develop the infrastructure for a Mississippi food hub. The group will also create a new Food Innovation Center, which will include a farm-to-table restaurant, grocery, and training center.