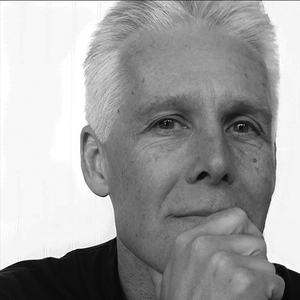 John Bielenberg is a designer, entrepreneur, and advocate for creating a better world through the application of creativity and ingenuity. John co-founded Future Partners, a Silicon Valley Innovation firm, in 2012 to teach Rapid Ingenuity Practices to individuals, teams, and organizations around the world. In 2001, John co-founded C2 Group, a brand strategy firm, to help leaders from technology start ups, Fortune 500 companies, and the world’s top business management consulting firms develop, build and protect their brands. In his career, John has won more than 250 design awards, including the AIGA (American Institute of Graphic Arts) Gold Medal for lifetime achievement. The San Francisco Museum of Modern Art has acquired six of his design projects and staged a solo exhibition of his work in 2000.

In 2009, John was awarded the Washington University Skandalaris Award for Design Entrepreneurship and an honorary doctorate degree from Maryland Institute College of Art. John was also awarded the 2011 NASAD Citation for outstanding work and overall impact in the fields of art and design as an author, educator, social activist and designer. Most recently, John launched CCA Secret Project, a new Rapid Ingenuity Lab at the California College of the Arts in San Francisco.

Bielenberg collaborated with Alex Bogusky and Ana Bogusky and Rob Schuham in 2010 to form COMMON, a brand that supports, connects and celebrates those designing for a new era of socially minded enterprise. Most recently, he partnered with Greg Galle to launch a firm called Future, which engages with organizations, institutions and companies to unlock the potential of human ingenuity.